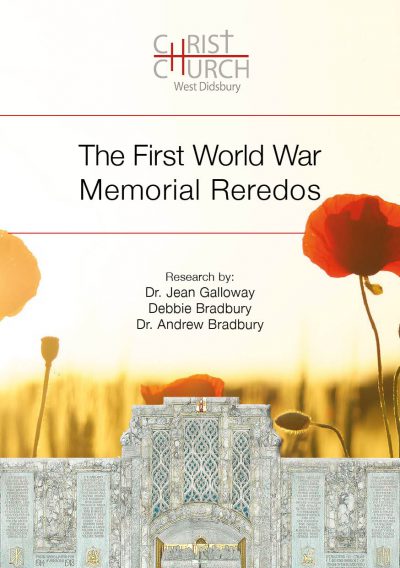 Since 2011 Christ Church, West Didsbury, has been undergoing major restoration work to its roof. Preparatory work started in May 2011, building work started in 2012 and work was completed in early 2018, apart from internal redecoration which cannot take place until the plaster has dried out. The work was 3 times more costly than anticipated owing to the discovery of additional wet and dry rot in the timber and the theft of lead as the work progressed. Thanks to grants from English Heritage (EH) and the Heritage Lottery Fund (HLF) totalling almost £600,000 it has been possible to complete the work.

A focal point of the interior of Christ Church is a striking World War 1 memorial on the east wall behind the altar. It takes the form of a marble and alabaster reredos screen and bears the names of 80 servicemen from the locality who lost their lives. We are now a century past the First World War and the war is being commemorated nationally. As part of grant applications to EH and HLF the parish offered to research the history of those who are named. It seemed important to involve children from two local primary schools in the process so that they could learn about our artistic and military heritage and the sacrifices made for our benefit by individual servicemen and their families. We were fortunate to be awarded one of the grants on this basis.

The main tool for this project has been the Ancestry website but we have also used the Commonwealth War Graves Commission site and the British Newspaper Archive. The Manchester and Lancashire Family History Society have been generous with their time and have given guidance on using different websites. We are also grateful for help from others involved in similar projects locally and to several members of servicemen’s families with whom we have been in contact. The children and teachers of Cavendish Road School and Barlow Hall School have visited Christ Church and done some drawings of the memorial. Cavendish Road staff and children have also shared some of their findings which came to light when researching their own war memorial.

The Christ Church memorial was formally approved on 29 April 1921, approval being given to the rector, Rev Richard Lavers Kemp, and the Church Wardens, David Elder Anderson and Arthur Walter. A matching wall was constructed at the chancel step, replacing the original iron and brass screen which was transferred to the Lady Chapel. David Elder Anderson was the father of Archibald John Scott Anderson, the second name on the memorial.